First off, I want to begin this blog post by saying that I am not against donating in general. I donate to local charities whenever I can because I believe that the larger the charity the more waste and embezzlement there is at the top. Donating time to help people can be just as important. Help your fellow humans!

The ALS Ice Bucket Challenge seems like a good idea at first. Donate $100 to ALS research or donate however much you can and spill a bucket of ice water on yourself to have a tiny understanding of what it is like to have ALS while sharing it with the internet. I can understand why it went viral, who does not want to see their friends, family, and favorite celebrities get dunked with a frigid bucket of cold ice water?

ALS is a horrible disease that has even afflicted famous people including Lou Gehrig and Stephen Hawking. Who would not want to donate to help people suffering from a debilitating disease?

I will not currently donate to the ALS association and you should not either.

Now before you hold me over the flames hear me out.

Let us look at the ALS association’s annual report?

The first picture on the report is a researcher hopefully finding a cure for ALS. This picture really tugs on the ol’ heartstrings.

This report shows where all the donation money the ALS foundation went to. Let us find out!

Wow, the ALS Association had a revenue in fiscal year 2012 of $65 million dollars. Most of that profit must have gone to research. According to their report only about 11% or seven million dollars of their revenue. So where did the rest of the money go? Did it go to raising awareness?

Any foundation has to have salaried employees, require office space, and pay business expenses to continue operating. So how much of the raised money went to keeping the ALS Association running? Well about 8% or five million dollars. That does not seem too bad; I can live with that easily. In all honesty, I would have no issue with the foundation paying a higher salary to its employees as long as more money went to research and the amount was honestly disclosed.

Is something is strange about these numbers? Are we not missing about forty million dollars or about 67% of their total accounted revenue?

It is listed on the report as other program activities.

Well, okay those other program activities have to be listed on the report right? I mean this is not a low amount of money unaccounted from the books. An unaccounted for forty million dollars could go to research or awareness. Hell, I would not even complain as much if I knew it was going to pharmaceutical companies or government lobbying as long as I know where the money is going.

It is not listed, anywhere on the document. Forty million dollars unaccounted for, in a nonprofit charity that is supposed to help fund research and raise awareness for ALS.

Wait a minute! I found a new pie chart on their website and last year’s financial information. Please tell me they disclosed where all the missing money went to and that more money went to research! 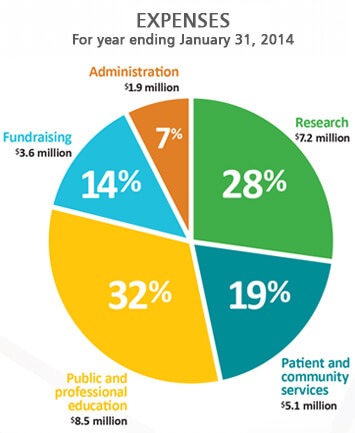 Well unless I am reading this wrong, all of their money was accounted for last year but they made about forty million dollars less? What caused the ALS Association to have a large decrease in fundraising last year? The ALS Association made fifty million in 2011 and guess what? Thirty two million dollars of it when to unlisted “other” expenses again. Did they make a mistake and not fully report their profits for 2013 or did they do it on purpose to make it appear that all of their money is being spent properly?

Can we believe any financial statement that the ALS Association has released? Is any money truly going to honest research? If anyone can prove to me that my assumptions are wrong with cold hard facts, I will donate $100 myself.

In addition, if you have ALS I also implore you to change your diet. Look into the Bulletproof diet or Wahls protocol to possibly improve your life. I would research how to increase SOD or I would supplement daily with a SOD enzyme. Some research concludes that people with ALS might have a mutation of their SOD1 genes.1 SOD is a powerful mitochondrial antioxidant and possible damage to those genes can cause extensive free radical damage to their delicate neurons. I would also look into the possible link between ALS and chronic Lyme disease.

This all seems ice fishy if you ask me. What do you believe happened to the unaccounted for money?