Licorice (Glycyrrhiza glabra) is a prized root with demonstrated countless health benefits when used properly. Licorice can improve your gastrointestinal health, reduce bacterial dysbiosis (including H. pylori), help you to overcome viruses, reduce inflammation and pain, improve mental health, improve histamine intolerance, increase cortisol (might be useful in people who have low cortisol levels), and promote liver health. Licorice does have some drawbacks associated with its use including elevated blood pressure and water retention, which is caused by the component glycyrrhizic acid (which is removed from the supplement DGL). Licorice tastes very sweet, which is why it is used as a food additive in candy, but how can this root improve your health when used correctly?

What is Licorice and How Can it Improve Your Health?

Glycyrrhiza glabra is a herbaceous perennial legume native to southern Europe and Asia. The root of the plant (licorice) is used in food and supplement preparation. Licorice was mainly used throughout history as a candy product and flavoring in cooking. It was also used as a flavoring agent in tobacco and acts as a bronchodilator. Licorice has a lot of medicinal benefits:

The Issues Concerning Licorice Use

Glycyrrhetic acid depletes potassium in the body over time which may cause a blood pressure increase and/or arrhythmia. Also, the enzyme 11B-hydroxysteroid dehydrogenase (an enzyme that converts cortisol in the kidney to its inactivated form cortisone) is inhibited by glycyrrhetic acid increasing bio-available cortisol. It also binds directly to mineralocorticoid receptors and increases cortisol production as well. Binding of glycyrrhetic acid to the mineralocorticoid receptors causes the body to retain sodium and excrete potassium causing electrolyte imbalances that may cause arrhythmia. Licorice should be used with caution in people with elevated cortisol, chronic kidney disease, if you are prone to arrhythmia, and if you take medications that interfere with electrolyte metabolism (diuretics for example). Glycyrrhizic acid causes water retention in elevated doses or if taken long term by increasing blood pressure and volume. In some cases, this can become fatal. The use of licorice, however, may be helpful if you have low cortisol production but its use should be monitored. Proper supplementation of potassium (adrenal cocktail without salt) or adequate ingestion of dietary potassium (3,000 to 4,000 mg daily) may help reduce some of the side effects of glycyrrhetic acid causes from potassium wasting. Finally, licorice consumption may reduce testosterone production, but studies are mixed.23 24 25

“Liquorice is the root of Glycyrrhiza glabra and has been traditionally used for both its culinary and medicinal properties. Its active ingredient is glycyrrhizin which is hydrolysed in vivo to glycyrrhetinic acid. Glycerrhetinic acid inhibits 11β-hydroxysteroid dehydrogenase type 2 (11β-HSD2), an enzyme located in renal tissue that converts active cortisol to inactive cortisone. Inhibition of 11β-HSD2 results in a significant increase in cortisol concentration at the renal mineralocorticoid receptors. The consequent uncontrolled mineralocorticoid activation leads to unrestricted sodium reabsorption and potassium excretion. This results in hypertension, hypokalaemia and suppression of the renin–aldosterone axis. This pattern of an elevated blood pressure and hypokalaemia in the context of a suppressed plasma renin and aldosterone is referred to as pseudohyperaldosteronism and constitutes one of the variants of the AME syndromes. Chronic liquorice consumption may cause ongoing, though ultimately transient, suppression of the renin–aldosterone axis following discontinuation of ingestion: this may continue for up to four months. In contrast, the activity of 11β-HSD2 recovers earlier. The enzyme is suppressed for two weeks after liquorice is withdrawn and its activity increases as the urinary glycyrrhetinic acid levels decrease.“26

DGL Licorice, One of the Best Supplements to Relieve Upper Gut Digestive Issues

DGL supplements have most of the glycyrrhizic acid removed and are still theorized to have most of the benefits of consuming standardized licorice for the gastrointestinal system. DGL is excellent for healing ulcerative tissue, gastritis, and preventing damage done to the mucosa by NSAID medication use. NSAID’s including ibuprofen and aspirin is one of the few non H. pylori causes of stomach ulcers and gastritis. NSAID’s harm stomach health by inhibiting COX-1 (cyclooxygenase) which hinders gastric blood flow and tissue repair. NSAIDS also thin stomach mucus by reducing the production of prostaglandins needed to stimulate stomach mucus production required to protect the lining. Since DGL improves stomach mucus production, coats the stomach, and reduces inflammation in can prevent the damage caused by NSAID’s. Finally, DGL does not impede stomach acid production, increase the pH of the stomach, or hinder gastric emptying.28 29

DGL coats the lining of the stomach reduces inflammation and its flavonoids help protect the stomach mucosal lining from excessive oxidative stress and endotoxins. Compounds in DGL licorice also regenerate stomach epithelial cells, healing the lining. DGL that is chewed well and swallowed may also help coat and protect the esophagus from endotoxin inflammation and refluxed stomach contents. DGL licorice also contains compounds glabridin and glabrene that help to reduce dysbiosis in the stomach, including H. pylori. Finally, DGL may reduce overall gastrointestinal inflammation and help improve the health of people suffering from inflammatory bowel disease.30 31 32

“On the other hand, relevant gastrointestinal effects (antiulcer activity) of G. glabra may provide noteworthy insights in understanding the pharmacological benefits in alleviation of functional dyspepsia. A double-blind clinical study on DGL exhibited ulcer healing properties upon administration of capsules (each with 400 mg actives) for 8 weeks and subjective improvements were recorded in 90% subjects. Lakworthy and Holgate reported antiulcer activity after administration of tablets containing 380 mg DGL in all the 32 patients (100%) endoscopically diagnosed having duodenal ulcer and with chronic history. The beneficial effects were found to be improved as the duration of intervention extended since 56% of the patients recovered after 12 weeks of treatment whereas 78% recuperated after 16 weeks. These findings were in accordance with the current study wherein total symptom scores and NDI were found to be improved over a period of 15 and 30 days.“33

Rarely DGL supplements can cause allergic reactions if you are allergic to licorice. I have seen it cause minor blood pressure increases in a few people, but their blood pressure went back to normal upon discontinuation of DGL. I have taken DGL myself many times of the past few years, and I have tolerated it very well. It helped improve gastritis caused by my H. pylori dysbiosis and improved the symptoms of my silent reflux. Finally, DGL or licorice root supplementation might interfere with the metabolism of the following medications:34 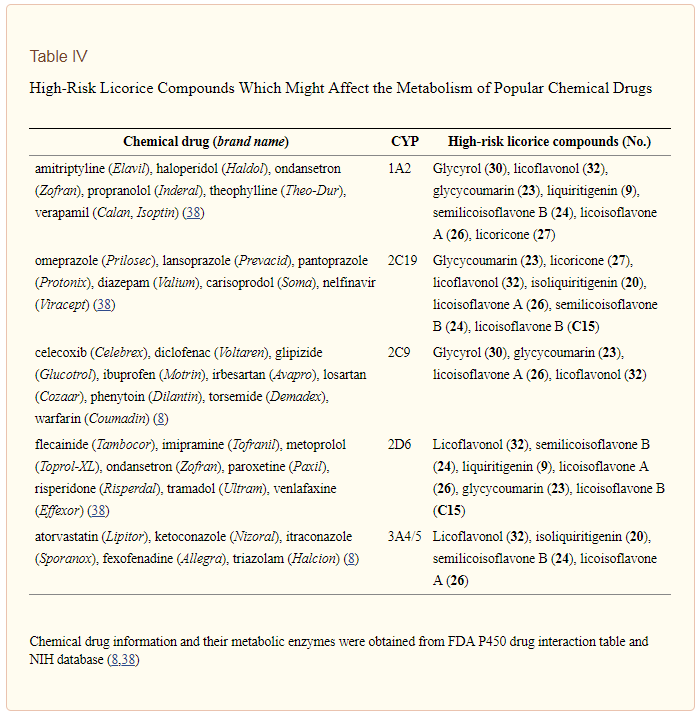 Overall DGL is a well-tolerated supplement:

“No treatment-related adverse effects were reported during the study, and GutGard (DGL supplement) administration was found to be safe and well tolerated by all patients during the complete intervention period.“35