I Do Not Recommend Amitriptyline (Elavil) for Reflux Disorders 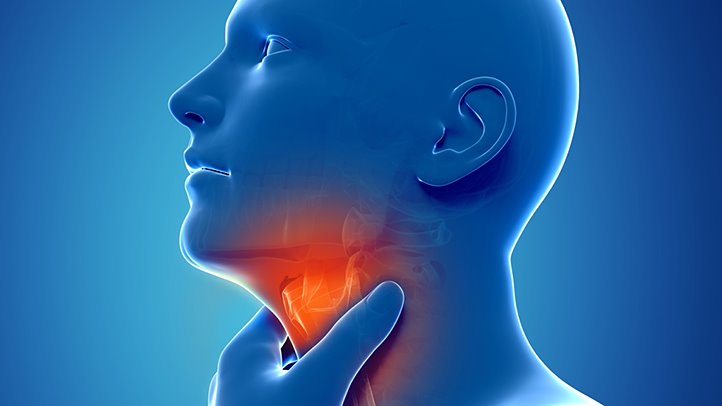 I Do Not Recommend Amitriptyline (Elavil) for Digestive Disorders

The medication amitriptyline is commonly prescribed for people who suffer from reflux disorders. Amitriptyline is a tricyclic antidepressant that is known to have many different adverse side effects, some quite severe. Even one of the foremost researchers of silent reflux, Dr. Jamie Koufman, frequently prescribes and recommends the use of the antidepressant. I find it unsettling that she often recommends the use of the antidepressant in her practice even though it has numerous side effects, Especially since she cautions the use of proton pump inhibitor medications for silent reflux which also many side effects as well. So what is amitriptyline, why is it prescribed for reflux disorders, and why do I not recommend it’s use?

All About Amitriptyline (Elavil)

Amitriptyline is a tricyclic (its chemical structure contains three rings fused with a side chain) antidepressant medication that was discovered in 1960 and approved by the United Food and Drug Administration (FDA) in 1961. In 2016, it was the 88th most prescribed medication in the United States, with more than eight million prescriptions. It is a potent serotonin reuptake inhibitor, a moderate norepinephrine reuptake inhibitor, and does not strongly affect dopamine reuptake. A reuptake inhibitor is anything that reduces the body’s ability to reuptake neurotransmitters, increasing the amount of neurotransmitters in the synaptic cleft (space in between neurons). During reuptake, a transporter protein takes excess neurotransmitter molecules out of the synaptic cleft and puts them back into the neuron that released them reducing its bioavailability. The medication is also a histamine antagonist (H1 and H2), so it may reduce stomach acid production and blocks histamine’s effect on the brain as an alert neurotransmitter causing drowsiness. It also acts as an NDMA antagonist, decreases substance P, and activates adenosine A1 and opioid receptors, which reduces pain. Finally, amitriptyline inhibits sodium channels, calcium channel (L-type), and voltage-gated potassium channels (Kv1.1, Kv7.2, and Kv7.3), and therefore acts as a sodium, calcium, and potassium channel blocker (which explains its cardiovascular side effects because the heart requires these channels for proper conduction).1 2 3 4 5 6 7

The amitriptyline (Elavil) medication insert states its clinical pharmacology as the following:8

“Amitriptyline HCl is an antidepressant with sedative effects. Its mechanism of action in man is not known. It is not a monoamine oxidase inhibitor and it does not act primarily by stimulation of the central nervous system. Amitriptyline inhibits the membrane pump mechanism responsible for uptake of norepinephrine and serotonin in adrenergic and serotonergic neurons. Pharmacologically, this action may potentiate or prolong neuronal activity since reuptake of these biogenic amines is important physiologically in terminating transmitting activity. This interference with reuptake of norepinephrine and/or serotonin is believed by some to underlie the antidepressant activity of amitriptyline“

Amitriptyline is further metabolized in the liver by CYP2D6 and CYP2C19 to nortriptyline and has a half-life of twenty-five hours. If you have polymorphisms in CYP2D6 and CYP2C19 genes that encode those enzymes, you may need to discuss with your doctor about taking a smaller dose if you are using the medication because it will slow its metabolism. Furthermore, if people have multiple copies of these genes, they maybe ultrarapid metabolizers and require more of the medication for a therapeutic effect. Nortriptyline is a more potent and selective norepinephrine reuptake inhibitor than amitriptyline which causes greater norepinephrine concentrations within the synaptic cleft’s.9 10 11 12

What does the medication insert mention about the use of amitriptyline and CYP2D6?13

“The biochemical activity of the drug metabolizing isozyme cytochrome P4502D6 (debrisoquin hydroxylase) is reduced in a subset of the caucasian population (about 7 to 10% of Caucasians are so called “poor metabolizers”); reliable estimates of the prevalence of reduced P4502D6 isozyme activity among Asian, African and other populations are not yet available. Poor metabolizers have higher than expected plasma concentrations of tricyclic antidepressants (TCAs) when given usual doses. Depending on the fraction of drug metabolized by P4502D6, the increase in plasma concentration may be small, or quite large (8 fold increase in plasma AUC of the TCA)”.

“In addition, certain drugs inhibit the activity of this isozyme and make normal metabolizers resemble poor metabolizers. An individual who is stable on a given dose of TCA may become abruptly toxic when given one of these inhibiting drugs as concomitant therapy. The drugs that inhibit cytochrome P4502D6 include some that are not metabolized by the enzyme(quinidine; cimetidine) and many that are substrates for P4502D6 (many other antidepressants, phenothiazines, and the Type 1C antiarrhythmics propafenone and flecainide). While all the selective serotonin reuptake inhibitors (SSRIs), e.g., fluoxetine, sertraline, and paroxetine, inhibit P4502D6, they may vary in the extent of inhibition. The extent to which SSRI-TCA interactions may pose clinical problems will depend on the degree of inhibition and the pharmacokinetics of the SSRI involved. Nevertheless, caution is indicated in the coadministration of TCAs with any of the SSRIs and also in switching from one class to the other.Of particular importance, sufficient time must elapse before initiating TCA treatment in a patient being withdrawn from fluoxetine, given the long half-life of the parent and active metabolite (at least 5 weeks may be necessary)”.

What about amitriptyline and its interactions with other medications?14

So what does the medication insert say is the official labeled use for amitriptyline?27

“For the relief of symptoms of depression. Endogenous depression is more likely to be alleviated than are other depressive states.”

Well, the medication is being used for a heck of a lot more medical conditions than depression. What are the numerous side effects for amitriptyline?28 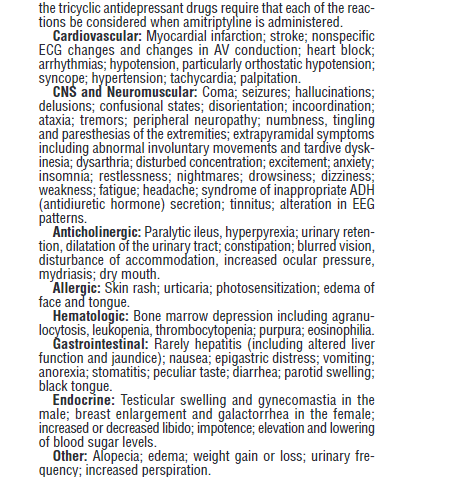 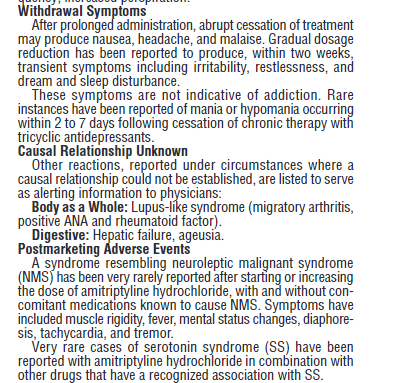 Wow, there are numerous listed side effects, and the medication has significant withdrawal potential. Some of the listed side effects that occur frequently include dry mouth, drowsiness, weight gain, sexual dysfunction, arrhythmia, elevated blood pressure, and digestive issues (including constipation [slows down motility] and worsening reflux [loosens the esophageal sphincters]). The medication has also been associated with causing coenzyme-Q10 deficiency (causing mitochondrial toxicity), so if you decide to take it you should talk to your doctor about supplementing with ubiquinol while you are on the medication. Are there any warnings in the drug insert associated with the use of the medication?29 30 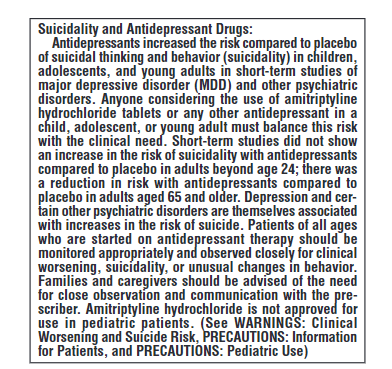 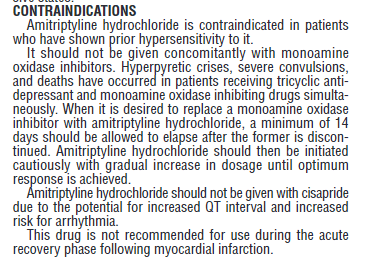 So the use of amitriptyline is cautioned in children, adolescents, and young adults and is not approved in pediatric patients. So what is the risk of suicide for children under the age of eighteen who are using amitriptyline versus a placebo?31

Fourteen additional suicides per thousand patients treated under the age of eighteen. In addition:32

“It is unknown whether the suicidality risk extends to longer-term use, i.e., beyond several months. However, there is substantial evidence from placebo-controlled maintenance trials in adults with depression that the use of antidepressants can delay the recurrence of depression.”

Its use is also cautioned in people with cardiovascular disease, people prone to QT arrhythmia’s, and people who have recently suffered a heart attack. Finally, its use is cautioned for people with bipolar disorder (it may worse mania and may trigger suicidal tendencies), seizure disorders, and people with angle-closure glaucoma.33

Did you skip to this part of the blog and bypassed the numerous side effects associated with amitriptyline (Elavil)? If you did then go back and read the first section of my blog to discover why I would never recommend its off label non-approved use for reflux disorders because of its side effect profile. However, are there other reasons why I would not recommend the use of amitriptyline (Elavil) for reflux disorders?

I do not recommend the use of Amitriptyline (Elavil) in reflux disorders instead, I recommend that you attempt to discover the root causes of your reflux and try to relieve them instead. If you are suffering from reflux contact me for coaching and we can see what we can do to get you better!