Five Reasons to Lower Your Dose of Vitamin C 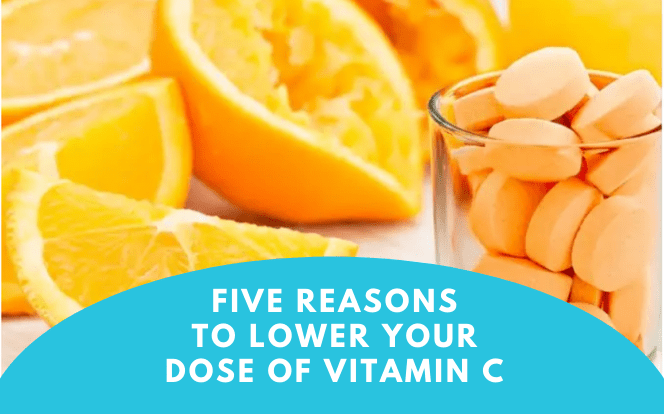 Vitamin C is a superior micronutrient and great antioxidant, it can donate one of its electrons to neutralize a free radical, and some say that going without it could be lethal, but what happens when you take too much of it?  There is new evidence coming out that may lead you to consider lowering your dose of vitamin C.

In nature, we get vitamin C from fruits and vegetables that are loaded with fiber.  This allows for easier absorption of vitamin C because it gives the plasma to uptake the nutrient without making as much direct contact with the tissues of the intestines.  When you take a supplemental form (especially on an empty stomach) it is concentrated, and the tissues can become irritated.  Then, the body responds by flushing the vitamin C out with water creating an osmotic effect1.

The diarrhea that goes along with this is a nuisance, but not your biggest problem!   When the epithelial cells of the intestines allow water into the digestive tract, the tight junctions open (the space in between the cells).  While the tight junctions are open, toxins can escape through the openings and get into your blood stream.

According to cancer researchers, much of the industrial vitamin C that they are getting to treat patients is in the wrong form.2  For vitamin C to be effective, it must be in its reduced form (L-ASC, ascorbate), but most of the time, suppliers are producing the oxidized form dehydroascorbic acid, DHA).  Humans are one of the only vertebrates that do not make their own vitamin C, so the transport mechanisms are different (GLUT-2, and GLUT-8 transport sites).  These transport mechanisms were evolved over thousands of years to allow for natural vitamin C to enter the body, not the oxidized form made by most supplement companies.  This reduces the absorption and can lead to health problems.

Iron is an important mineral for just about every organism.  We use it to carry oxygen through the blood stream so that the mitochondria can perform a function called glycolysis which produces energy.  Bacteria also use iron, and it is an important mineral in the formation of biofilms which provide them shelter and protection.  Bacteria require iron in a certain form (ferrous iron), and unabsorbed vitamin C has the unfortunate side effect of reducing ferric iron (F+3) into ferrous iron (F+2)3.  If you are having issues with SIBO, you may want to try iron chelation to prevent the bacteria from using your vitamin C supplement to strengthen their biofilms.

The half life of vitamin C in the plasma is estimated at only about thirty minutes.4  That’s how long it takes for the body to use it up to clear out free radicals!  In the meanwhile, consumption of antioxidants can lead to the reduction of the liver from producing a compound called glutathione, which is the body’s master antioxidant.  Glutathione is superior to vitamin C because it can be recycled and used again.  If you consume too much vitamin C and over a long enough period, your body will compensate by producing less glutathione—which defeats the purpose of taking vitamin C in the first place!

Your body absorbs vitamin C as it needs it.  Since the body is in constant fluctuation, sometimes it absorbs more, sometimes less.5  If you are ill, under stress, traveling, or injured, your body will activate more vitamin C transport proteins which will lead to greater absorption.  If you are rested, well, and happy, your body makes less of them meaning that more vitamin C will get left behind in the intestines which could cause health issues.  Maybe we should try to get most of our vitamin C from food during these times and only supplement when we need to?

Many people have poor diets and don’t get enough vitamin C.  Please don’t exacerbate your health issues by consuming an excessive dose!  For most people 200mg is more than enough, and if you need more, spread out your doses throughout the day, and always take vitamin C with food.