Fix Your Gut Podcast on GERD

The Causes, What Your Doctor Does Not Tell You, and How to Find Relief

To correctly treat heartburn you have to choose which above cause is creating your suffering. Some problems may overlap so tackle each problem accordingly.

Gastroesophageal reflux disease is a condition in which mucosal damage is done to the esophagus, from chronic stomach acid, pepsin, bile, or endotoxins, being trapped between the stomach and the upper esophageal sphincter. Persistent “trapping” of reflux gives you the characteristic feeling of heartburn. The esophagus has antireflux defense mechanisms in place to help protect itself from reflux that occurs throughout the day. When we reflux contents from our stomach, attach itself to the esophagus. One of the defense mechanisms is our esophagus ability to clear the reflux. When we swallow, we swallow a mixture of saliva and salivary bicarbonate to help normalize the pH of the esophagus and inactivate both acid and pepsin. If we reflux into the oral cavity, less saliva and salivary bicarbonate are produced and what is produced is used within our oral cavity to protect the oral mucosa, which is why people with severe reflux have dry mouth. Also, we have cells in our esophageal lining that produce carbonic anhydrase which forms bicarbonate to help further buffer refluxed contents as well. Cells that produce the carbonic anhydrase are found in the basal layer of the esophagus (one of the outermost layers), which is easily damaged by dysbiosis and bile reflux. Having GERD can cause acute and permanent injury to the esophagus, including esophagitis, reduction or GERD defensive mechanisms, esophageal microbiome changes, strictures, or even cancer from chronic inflammation if left untreated.

Someone with GERD usually suffers from a multitude of symptoms including a sore throat, chest pain, gastritis, nausea, and dysphagia (trouble swallowing). If your upper esophageal sphincter is also weakened you can also have the following symptoms breathing issues, increased salivation, dry mouth, facial flushing, stomach chyme regurgitation, vomiting, poor oral health, sleep apnea, trouble sleeping, sinus issues, tinnitus, coughing, and hoarseness. If the GERD is left untreated, it can cause a potentially reversible condition called Barrett’s esophagus where the epithelial lining of the esophagus turns into squamous or intestinal mucosal epithelium which crates a higher risk of developing esophageal cancer.

Acknowledgment of symptoms by a doctor usually makes diagnosis of GERD. However, an endoscopy can be done to get an idea of how damaged the esophagus is and the general function of the LES and stomach. An endoscopy should only be performed when needed because of the associated risks of the procedure. During an endoscopy, a flexible wire with a camera at the end is swallowed, and the camera takes pictures down the esophagus and into the stomach. One of the best tests used in the diagnosing of GERD is an esophageal pH monitoring test. This test is sometimes performed in the hospital for at least twenty-four hours, and during this test, a flexible catheter with a PH monitor on the end is placed through the nose down into the esophagus. It can be uncomfortable to have a tube put down your nose and into your throat, but it can be useful in the diagnosis to determine if you are suffering from reflux.17 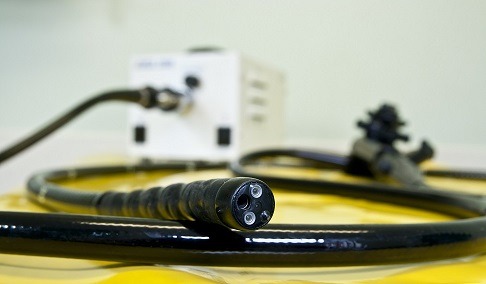 The camera of a flexible medical endoscope used for exploration of the upper gastroenteric tract (gastroscopy) the lower enteric tract (proctoscopy, colonoscopy, sigmoidoscopy) and the airways (bronchoscopy). Also for taking biopsies, performing surgery and removing foreign bodies in human procedures.

Conventional medicine attempts to treat GERD with acid-reducing medications, and if they fail surgery. Antacids like Tums neutralize stomach acid, making your stomach contents more akaline.. Acid-reducing medications like H2 antagonists or proton pump inhibitors limit the stomach’s production of stomach acid. In theory, this sounds like a great idea for someone who has GERD. If you limit the amount of stomach acid that irritates the esophagus refluxed stomach, a person with GERD should find much-needed relief. However, for most people, the relief is short-lived.18

Antacids – Examples: Tums, Maalox, Gaviscon, milk of magnesia, baking soda – Antacids are drugs that neutralize stomach acid or raise pH levels in the stomach. Antacids are usually free of side effects for most people if they are taken short term. Magnesium hydroxide is one of the safest antacids most people can use, but too much may cause diarrhea. Sodium bicarbonate is another somewhat safe antacid, but it should people with extremely high blood pressure or have a sensitivity to sodium. Sodium bicarbonate can rarely cause bloating and stomach distension (from gas production when the sodium bicarbonate which is alkaline mixes with acidic stomach contents, forming carbon dioxide) and should be mixed well with water and left to settle a few minutes before consumption. I do not recommend the use of calcium carbonate as an antacid. Excess calcium may calcify the arteries if your magnesium storage’s are depleted and are suffering for arterial inflammation and it causes alkalosis (milk-alkali syndrome) with long-term use, which is a serious medical condition. Aluminum is the worst antacid anyone can take since aluminum is neurotoxic and constipates. People with limited kidney function should limit the use of all antacids.

H2 antagonist – Examples: Pepcid AC, Zantac – H2 antagonists are the safest of the stomach acid reducing medications because they only last for about six hours and work by lowering histamine levels in the stomach which lowers stomach acid production. H2 Antagonists can still cause the same problems of lowered levels of stomach acid like PPI’s if taken for a long period of time, even if they have a smaller side effect profile.19

Proton pump inhibitors – Examples: Prilosec, Prevacid – PPI’s might be safe for occasional use (no more than two weeks, lowest dose to achieve relief), when needed (severe gastritis, Zolliger-Ellison syndrome, stomach perforation, ulceration). If you take a PPI longer than a month, then some extra issues might develop from the lack of stomach acid. Patient’s who take PPI’s long-term start to have a whole host of problems including B12 deficiency,20 bone fractures,21 Increased risk of C. diff Infection,22 magnesium deficiency,23 food allergies,24 and SIBO.25 These drugs inhibit the hydrogen/potassium ATPase enzyme system in the gastric cells that secrete stomach acid. These drugs were developed because they last longer that H2 antagonists and usually block acid for one to two days.26

The problem with acid-reducing medications is once you take them long term; the medication does not correct any of the above problems that were the cause of GERD in the first place. By taking a PPI long-term; all the medication is doing is “masking” the symptoms, instead of tackling the original cause of the disease, which there are many. Taking a PPI for a long time leads to the average person reducing the intrinsic factor of the stomach (becoming deficient in B12), further weakening of the LES, developing a magnesium deficiency, developing food allergies from improper food digestion, and even developing or worsening SIBO from the lack of stomach acid which reduces bacterial colonization from food ingestion. The further in reduction of stomach acid from the medicine causes a whole host of problems that the person did not originally have, and since the cause of their GERD has not been dealt with, the person sometimes becomes dependent on using the PPI for the rest of their life.

This “masking” of the symptoms also explains the worsening GERD attacks one has after discontinuing the PPI. The body tries to up-regulate stomach acid to take care of the original issues that started because of PPI medication being taken for so long (dysbiosis, constipation, hiatal hernia, slow gastric emptying, weakened LES). The up-regulation of stomach acid causes worse GERD symptoms than one previously had, because of further increased abdominal pressure and dysbiosis causing more frequent reflux events. The average person goes back on their PPI and the cycle continues until the doctor recommends useless anti-reflux surgeries for relief.27

So What Can Be Done for GERD Relief??

Since there are many different causes of GERD there is not one protocol that will help you find relief. For some people, it can be a simple as taking D-limonene every other day for dinner for two weeks. For others, it can take months to relieve a difficult SIBO case. However, I would read the blog articles (linked to the individual causes above) I have written on the many different causes of GERD, and if you believe any of them are causing your GERD work on fixing them. Finally, listen to the above Fix Your Gut podcast on reflux to gain more wisdom on how to improve your digestive health, work with an integrative health care professional, or contact me for coaching and let us resolve your reflux.