Glutathione: The Key Ingredient in Detoxification 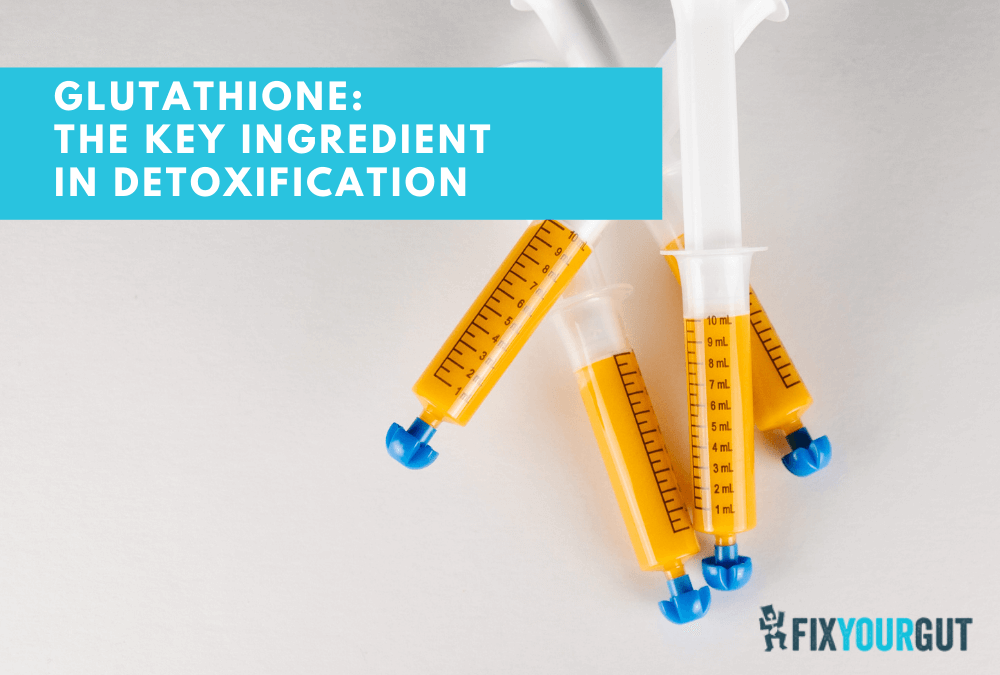 What’s the latest cleanse? Sipping on fresh lemon juice, in a near IR sauna, covering your body with avocados, and giving yourself a coffee enema simultaneously. Yeah, have fun with that! The problem with all of these cleanses and detox fads is that they go against basic biology. When the body detoxifies a toxin, it uses a compound called glutathione.

Glutathione is one of the most important compounds in nature. It is made up of a peptide (a very short protein) comprised of the amino acids glutamate, cysteine, and glycine. In biology, we refer to this unique pattern as a thiol, which is a chemical group that carries an extra electron so that it can be donated.

What are Antioxidants and Free Radicals?

There are many antioxidant compounds out there, but none are as important as glutathione. An antioxidant is a compound that carries a negative charge and is capable of donating electrons. A free radical is a compound that carries a positive charge. When a compound becomes positively charged, we call this oxidation. It is a little confusing because oxidation sounds like oxygen, but they have no relationship with each other. Opposites attract, and glutathione is perfect for scavenging free radicals, donating a free electron, and neutralizing the radical. The free radical is positively charged because it lacks an electron, and the glutathione molecules give their electrons to the free radicals making the charge neutral.

What about toxins that are not positively charged?

Free radicals are not the only toxins in the body. There are lipid peroxides, heavy metals, and metabolic waste. Glutathione uses a different mechanism for detoxifying these compounds called conjugation. This is when glutathione binds to the toxin at a specific site so that it is neutralized and can be excreted. Both the antioxidant method and the conjugation methods use up glutathione in the body and the liver must produce more.

What happens to the Glutathione that is used up?

When glutathione is used as an antioxidant, it gives up an electron, or oxidizes. It then becomes a positively charged ion. Two glutathione ions find each other and bind together forming a compound called glutathione disulfide (GSSG). If it is used in a conjugation (binding) reaction, the molecule is usually excreted from the body and lost, whereas GSSG can be recycled back into reduced (gaining an electron) glutathione. This can be done with the aid of other antioxidants like vitamin C.

How does the body make Glutathione?

When the body loses enough glutathione, it must produce more to prevent cellular damage. The liver produces the enzymes gamma-glutamylcysteine synthetase (connecting the glutamate and cysteine amino acids) and glutathione synthetase (finalizing the chain with glycine). The body uses amino acids from the food that we eat. Glycine and glutamate are abundant in the body and in our foods, but cysteine is rarer and is one of the determining factors in how much glutathione the body can make.

What can you do to make the body produce more Glutathione?

N-acetylcysteine (NAC) is the supplement form of the amino acid cysteine which is one of the rate-limiting factors in the synthesis of glutathione in the liver. Taking N-acetylcysteine supplements the body with the cysteine required to make glutathione. The supplement is kind of a double edged sword because excess cysteine is toxic and can have the opposite effect of what you are looking for. We recommend the Jarrow brand if you want to try it:

Some companies sell glutathione powders, capsules or tablets. The problem with the oral route is that glutathione is broken down into glutamate, cysteine, and glycine by enzymes in the digestive system. It’s not that it won’t raise glutathione levels (because it will to some degree). The body will use the cysteine (which is the conserved amino acid needed to make glutathione). It is an inefficient way to raise glutathione, and so we do not recommend the oral route.

Intravenous (IV) glutathione is the most effective way to increase glutathione levels in the body. If I were in the hospital, and my liver was failing, I would do everything I could to get myself hooked up to an IV bag with a glutathione solution in it. It bypasses the digestive system, so it is 100% absorbed.

Liposomal technology is an innovation from the pharmaceutical world that allows compounds to enter into human cells taken orally, yet bypassing the digestive system. Engineers have found a way to wrap the compound in a liposome, or a spherical bilayer sheet.

Producing liposomal glutathione is expensive, and it is difficult to achieve the specific phase state to allow the fats to surround the precious glutathione molecule. Let it get too hot or too cold, and you have some expensive sludge. Use the wrong pH, and the liposomes break apart. Fail to stabilize the electric charge, the glutathione leaks out. Some manufacturers of liposomal glutathione simply don’t have the science background to know what they are doing. Others know they are ripping off the public and think that they can get away with it.

We used to recommend a brand of glutathione that we thought would help people, but the company that sold it changed their formula. We reached out to them for comment and followed up with them several times. They simply keep responding, “I have forwarded your email to our product team and will let you know once they send me a response. Thanks!” After a few months of this, we decided to do our own independent testing of this product, and it turned out to be another inferior glutathione supplement. We had to look for a new product to recommend and ran across many other ineffective formulations like it. Some of the common problems that we see in just about every glutathione supplement are:

Many companies store their product in warehouses without climate control. They make large batches and some sit on the shelf for a year or more. Liposomes do not have a very long shelf life and the heat will destroy them.

Manufacturing liposomes is a mathematical process:

Companies mess this formula up because they:

We have even seen products that look as if they were simply blended instead of using sonic or high-pressure techniques.

If you see a “liposomal” product that is not liquid, it is not liposomal. I have asked some companies selling powdered, or encapsulated “liposomal” products about their rationale and they tell me that their product is “pre-liposomal” and say that once you drink the solution, it will form the liposomes in your stomach. If you were able to read and understand even half of the information above, you know that that is impossible. Don’t waste your money on this. It is the least effective way to increase glutathione in any of the areas that we have mentioned.

When to Take Glutathione

People who are sick or are on medications benefit from taking glutathione every day. In other people, taking glutathione, every day will actually prevent your body from making its own glutathione. I recommend that people take a large dose once per week to optimize their health, or just take it as needed. If you are stressed out, had a night of heavy drinking, were on an airplane, or spent time in a toxic environment, your body may not produce enough glutathione to keep up with the need, and you might want to supplement. 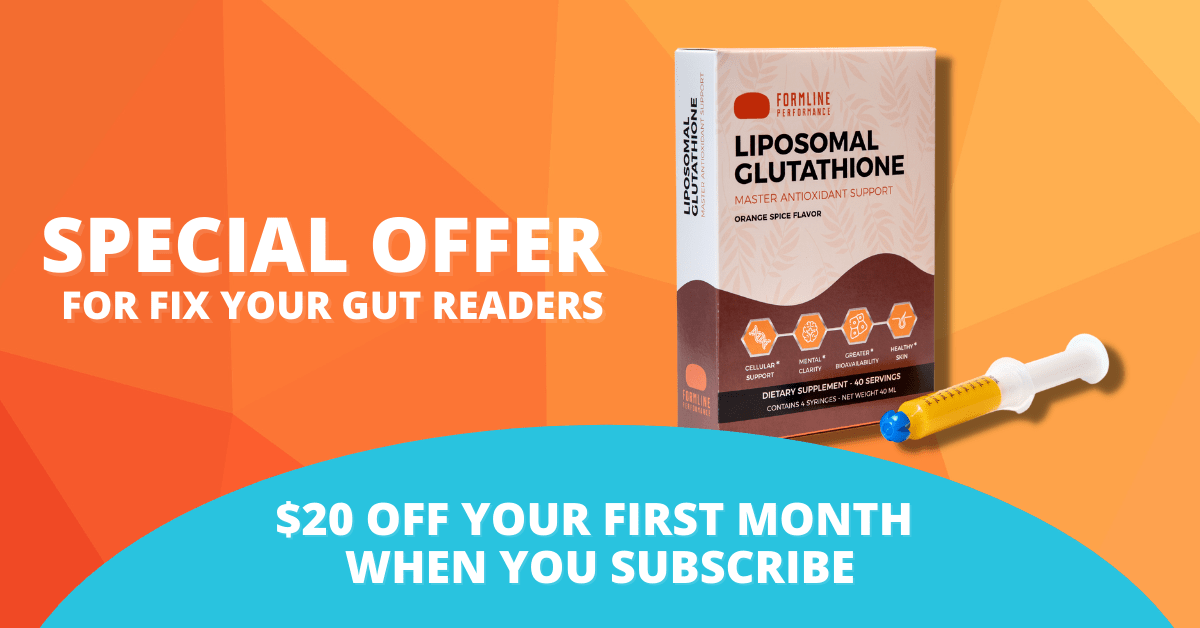