One of the main probiotic supplements I have had success recommending is Gutpro. The strains in Gutpro do not produce histamine and most of the strains in the probiotic do not produce large amounts of D-lactate. It is safe for most people that have those issues to take and gain the digestive benefits of taking a great probiotic supplement. Gutpro powder is free of common allergens including milk, casein, fish, shellfish, eggs, gluten, tree nuts, peanuts, corn, gluten, yeast, and soy. Gutpro also tests each batch of probiotics for potency, strain integrity, and contamination. Gutpro is also free of any prebiotics, which may cause negative digestive symptoms. Depending on the prebiotic, they may feed overgrowth worsening symptoms.

The probiotics in Gutpro are freeze dried and technically shelf stable when kept at room temperature, although Corganic states that the strains in Gutpro will start to lose potency at temperatures greater than 95F. They offer dry ice shipping and cold packs for an additional cost. I recommend that if you live in an area with temperatures above 70F to use the dry ice shipping service to maintain that your probiotic supplement remains cold throughout transportation for maximum potency. I would also store the Gutpro Powder in the refrigerator when you receive it. They also offer measuring spoons at an additional cost which I recommend to achieve proper doses. Finally, Gutpro is produced in the United States and is manufactured and shipped in a GMP-compliant facility with filtered air systems and temperature control to maintain the potency of their supplements.

Health Concerns that Gutpro May Improve

Breakdown of Individual Strains in Gutpro

Bifidobacteria bifidum – A strain of Bifidobacteria that is usually found in the colonic and vaginal flora of humans. The probiotic has been shown to help maintain healthy flora, bolster the immune system, and help digest carbohydrates. Recent studies have shown that bifidum may relieve allergies by decreasing Th2 immune reactions and may help suppress allergic reactions by restoring proper immune regulation.1 2 3

Bifidobacteria breve – A strain of Bifidobacteria found in the colonic and vaginal flora of humans. Cases of people with IBS have been shown to have a shortage of this important probiotic. In breastfed infants, breve has been shown to make up a majority of their gut bacteria. Breve ferments oligosaccharides in the digestive tract and also helps produce L-lactate.4 5 6

Bifidobacteria infantis – A strain of Bifidobacteria that is found in both infant and adult human colonic flora. Infantis helps produce acids that impede colonization of opportunistic bacteria by lowering colonic pH. Studies have shown it to be beneficial in eliminating symptoms associated with IBS.7 8 9

Bifidobacteria longum has been shown in studies to help improve lactose intolerance, prevent diarrhea, alleviate some food allergies, and help fight colonization of opportunistic bacteria in the colon. Finally, Bifidobacteria longum have been shown in studies to be able to help scavenge free radicals in the intestines and help prevent colorectal cancer.10 11 12 13 14 15

Lactobacillus gasseri – A strain of Lactobacilli that is found in the upper gut and vaginal flora. It seems to help with weight maintenance, maintaining a healthy microbiome and competes with H. pylori to reduce its colonization.16 17

Lactobacillus plantarum – A strain of Lactobacilli that is found in the human small and large intestine. It is used in the production of sauerkraut, kimchi, pickles, and sourdough bread. Plantarum is an excellent probiotic which has shown to be useful in the elimination of the symptoms associated with IBS. It can reform the gastrointestinal mucus barrier and inhibits opportunistic bacteria by making bactericidal peptides. It is able to produce D-lactate which may cause issues in people who have poor D-lactate metabolism. Lactobacillus plantarum also prevents allergies, especially to soybeans. Finally, Lactobacillus plantarum stimulates the immune system by producing the amino acid L-lysine in the intestine.18 19

Also, individuals with severe D-lactate metabolism issues may not be able to tolerate Gutpro. The bacterial strain Lactobacillus plantarum that is used in Gutpro produces D-lactate, but most produce L-lactate which may balance lactate concentrations in the digestive tract reducing issues. Some people with D-lactate issues can tolerate Gutpro, while others may not; it is worth a shot to see if it improves your digestive health.

I recommend trying Gutpro Infant if you are having severe digestive issues or severe D-lactate issues. It might be better tolerated with half of the probiotic being comprised of Bifidobacteria infantis (a well-tolerated strain), and the removal of L. plantarum which can produce some D-lactate during plateau phases of the growth cycle. 21

People with severe immunocompromisation should use any probiotic supplement including Gutpro with caution because it may cause sepsis. Even though Lactobacillus is considered a probiotic genus, infections of the probiotic have been noted. These “infections” may not occur from colonization, but rather from increased Th1 or Th2 reactions which worsen symptoms through increased cytokine production by the immune system. 22

Start with small doses when taking probiotic supplements at first to see how you react to them. Increase the dosage if need be and if you can tolerate it well to see if your digestive health further improves. The best time to take the probiotic supplement is in the morning upon waking on an empty stomach with a glass of filtered water. I suggest waiting at least one hour afterward to eat breakfast so that the probiotics will hopefully survive passage through the stomach without having to contend with a lowered stomach pH during eating for increased chances of survival.

Get a bottle of Gutpro today! 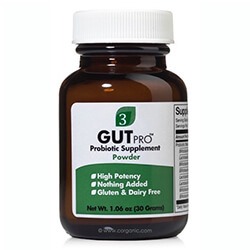