Why I Caution the Use of the Antibiotic Flagyl (Metronidazole)

Why I Caution the Use of the Antibiotic Flagyl (Metronidazole) for SIBO and C. difficile Infections

Many different medications are in use where doctors are sadly unaware of their potentially severe side effects. The antibiotic Flagyl (metronidazole) is no exception. The antibiotic is very cheap, and it is on the World Health Organization’s List of Essential Medicines (meaning it is believed to be safe and effective). Doctor’s prescribe it daily around the world without alerting their patients to the complications that are caused by the antibiotic and how to potentially protect them from unwanted side effects if its use is needed. I recommend that before you ever take a medication prescribed to you (unless it is an emergency) ask your doctor if they have ever read the medication insert for your prescribed medication. If they say no, then you should probably read it yourself, so you know more about the efficacy and risks of the prescribed medication and maybe find yourself another healthcare professional that takes the time to research what they prescribe. So what are the known severe side effects with Flagyl and what can be done to attempt to protect yourself from them if you have to take the antibiotic?

Flagyl is a frequently prescribed antibiotic of the nitroimidazole class, and it inhibits nucleic acid synthesis by disrupting the DNA of microbial cells. Flagyl has antimicrobial activity against Gram-positive and negative anaerobic bacteria (Bacteroides, Fusobacterium, Clostridium, some susceptible strains of Eubacterium, Peptostreptococcus, and Prevotella for example) and some parasites. Flagyl has little to no antimicrobial activity against aerobic bacteria. Flagyl is used for mild to moderate C. difficile and parasitical infections. It is useful against the parasites Dracunculus medinensis, Giardia lamblia, Trichomonas vaginalis, and the Entamoeba genus.1 2 3

There are many different known side effects associated with the medication. These side effects range from typical gastrointestinal upset that is associated with antibiotics to neuropathy, seizures, increased risk of Stevens-Johnson syndrome when combined with mebendazole, brain lesions, dysautonomia, cognitive issues, behavioral changes, aldehyde enzyme down-regulation, serotonin syndrome, and immune system suppression. Flagyl should not be used in people who have Crohn’s disease because of it may cause potential chromosomal abnormalities in circulating lymphocytes which might cause cancer. If you are suffering from liver disease then you want to make sure that your doctor monitors you for an increased risk of side effects because of hindered Flagyl metabolism. Medications that Flagyl interferes with include warfarin (hinders warfarin clearance), lithium (hinders lithium clearance), disulifram (psychotic reactions, further hinder salcohol metabolism), busulfan (hinders busulfan clearance), 5-fluorouracil (hinders 5-fluorouracil clearance), cyclosporin (hinders cyclosporin clearance), cimetidine (hinders Flagyl clearance), and carmustine/cyclophosphamide. The following images are Flagyl drug insert warnings associated with the antibiotic that I believe are important for you to make a proper decision whether or not to take the medication.4 5 6 7 8

Flagyl is also reasonably anticipated to be a human carcinogen per the National Toxicology Program put forth by the United States Department of Health and Human Services, though studies of its carcinogen potential are mixed.9 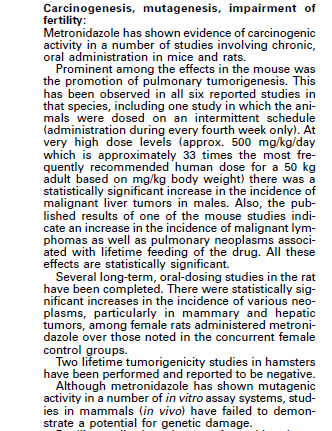 Flagyl use is not studied extensively for pregnant women and is known to cross the placental barrier and is secreted into human breast milk as well. The Flagyl drug insert states that it should be cautiously used in pregnant women because when given intraperitoneally it has caused intrauterine infant deaths and since it is an unknown carcinogen that it might trigger mother and fetal cancer development. Its potential carcinogenicity is also why it is not recommended for breastfeeding mothers because it is secreted into human breast milk. Finally, the antimicrobial is not recommended for pediatric use because its safety and effectiveness have not been established, except when used for the treatment of amebiasis.10 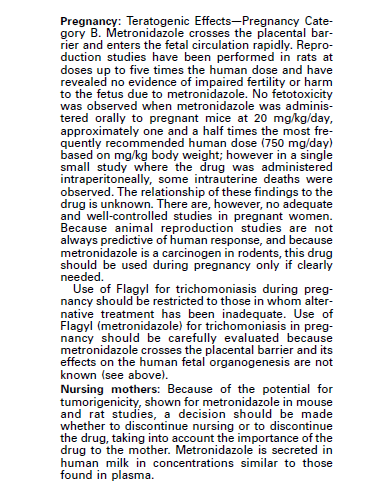 What Are Aldehyde Breakdown Enzymes and Why Do They Matter?

Aldehyde oxidase and aldehyde dehydrogenase are enzymes produced by the body to metabolize aldehydes. Nineteen ALDH genes encode these enzymes. Aldehydes are many different compounds, including formaldehyde and acetaldehyde. We encounter many various aldehydes throughout our daily life, and they differ in their toxicity.11

Alcohol metabolism produces acetaldehydes which further have to be metabolized to prevent oxidative stress and alcohol poisoning. If we are not able to detoxify alcohol correctly, its consumption quickly becomes deadly.12

Consumption of alcohol requires ample amounts of aldehyde oxidase and aldehyde dehydrogenase enzymes to convert acetaldehydes produced from ethanol detoxification by the liver into carboxylic acids including acetic acid that can be utilized or eliminated from the body. Though our body produces aldehydes through normal metabolism processes if our body is not able to detoxify them properly health issues occur. We also ingest acetaldehydes from other food sources including coffee, bread, and ripened fruit it differing amounts. However, the amount of acetaldehydes in these foods are less than the ingestion of alcohol. Without these enzymes, alcohol consumption becomes quite toxic. For example, the medication disulfiram was developed to help treat alcoholism by interfering with the functionality of aldehyde detoxification enzymes, mainly acetaldehyde dehydrogenase. After alcohol intake under the influence of disulfiram, the concentration of acetaldehyde in the blood may be five to ten times higher than that found during metabolism of the same amount of alcohol alone. When a person consumes alcohol while using disulfiram, they develop symptoms similar to mold sensitivity including headaches, brain fog, visual disturbances, elevated heart rate, face flushing, allergic reactions, nausea, vomiting, and shortness of breath. Many of the symptoms are similar to a bad hangover. If enough alcohol is consumed the symptoms can intensify from a severe hangover to coma and eventually death from aldehyde poisoning. Finally, disulfiram is slowly metabolized by the body and can take up to two weeks before its effects on blocking acetaldehyde dehydrogenase stop.13 14

Some people have gene polymorphisms that cause the body to encode less of these enzymes and are even more prone to the effects of acetaldehyde. ALDH2 is one of these genes that helps encode acetaldehyde dehydrogenase gene and is tested if you get a 23 and Me genetic test. Fungi and yeast produce aldehydes that require these enzymes to help us detoxify them. People using these medications or have an ALDH2 polymorphism might be more sensitive to mold toxicity.15 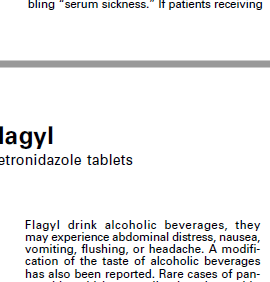 Flagyl like the medication disulfiram may reduce the body’s ability to produce aldehyde detoxification enzymes. The inhibition of these enzymes is the reason why alcohol is strongly discouraged in people who are taking Flagyl for infections. The same can be said for individuals who have mold sensitivity issues, yeast dysbiosis, or live in moldy environments.16 17 18

Flagyl supposedly inhibits the production of aldehyde detoxification enzymes within our cells and affects our mitochondria and liver function. It is possible that if you needed to take Flagyl and suffer from fungi issues, molybdenum may help increase enzyme production or at the bare minimum help you maintain proper levels of the mineral when you stop the medication so that the body can up-regulate proper enzyme levels. The body uses molybdenum to produce aldehyde detoxification enzymes.19 20 21

There are however a few studies that do cast doubt in Flagyl causing a reduction of aldehyde detoxification enzymes in people who have proper enzyme levels or people that do not have genetic predispositions causing lowered detoxification potential. One study indicates that the side effects from Flagyl are not because it inhibits aldehyde detoxification enzymes but instead are from the medication causing serotonin syndrome. So it would be my recommendation to discuss with your healthcare professional about the risk of taking Flagyl with SSRI’s, 5-HTP, tryptophan supplements, St. John’s Wort, or anything that increases or causes retention of serotonin because Flagyl may cause serotonin syndrome. Finally, another study indicates that the side effects of Flagyl that mimic aldehyde detoxification issues maybe from a microbiome shift caused by taking the antibiotic.22 23 24

Does Flagyl Cause Brain Lesions?

Yes, it appears that the antibiotic can cause brain lesions, especially in people who are deficient in vitamin B1 also known as thiamine. Flagyl metabolizes into 1-[(4-amino-2-methyl-5-pyrimidinyl)methyl]-3-(2-hydroxyethyl)-2-methyl-4-nitroimidazolium cation which is a close structural analog of thiamine. The thiamine analog is an effective inhibitor of thiamine pyrophosphokinase and acts directly as a thiamine antagonist. Symptoms of Flagyl neurotoxicity are very similar to a condition known as Wernicke encephalopathy which is caused by exhaustion of our bodily B vitamin reserves mainly thiamine. The main symptoms of Wernicke encephalopathy include ophthalmoplegia, autonomic dysfunction, ataxia, confusion, pupillary changes, vision and hearing loss, behavioral changes, neuropathy, seizures, cognitive issues, dysphagia, digestive issues, and brain lesions. Flagyl toxicity causes many of the same symptoms as Wernicke encephalopathy, so much, so they seem to overlap. Flagyl can cross the blood-brain barrier, and there are case reports and or insert warnings of the drug causing neuropathy, seizures, neurological problems, cognitive issues, autonomic dysfunction, hearing and vision issues, behavioral issues, dysphagia, digestive issues, and possible reversible brain lesions.25 26 27 28 29

For most people, the horrible effects caused by Flagyl toxicity are reversible in a matter of months and at most a year. Long term supplementation either orally or intravenously of thiamine, magnesium supplementation (thiamine requires magnesium to be utilized properly by the body), and working on restoring proper mitochondrial function will reverse the toxicity in most cases. Recommendations for proper dosing, recovery, and more information on Flagyl toxicity can be found at this blog.