Here at Fix Your Gut, we talk a lot about the gut microbiome, but what about the skin microbiome? We do just as much, if not more to manipulate the bacteria of our skin, and it may not be to our advantage. Our modern hygiene practices encourage the use of anti-bacterial soaps, ethanol based gels, isopropyl wipes, and benzene galore all to remove 99.9% of the microorganisms living on our skin. According to Dr. Larry Weiss, sterilization is not the best choice. As chief medical officer for AO+, Dr. Weiss has designed a probiotic spray containing Nitrosomonas eutropha D23, an ammonia oxidizing bacteria native to aquatic areas. I tested AO+ Mist over the summer and found the product very intriguing. 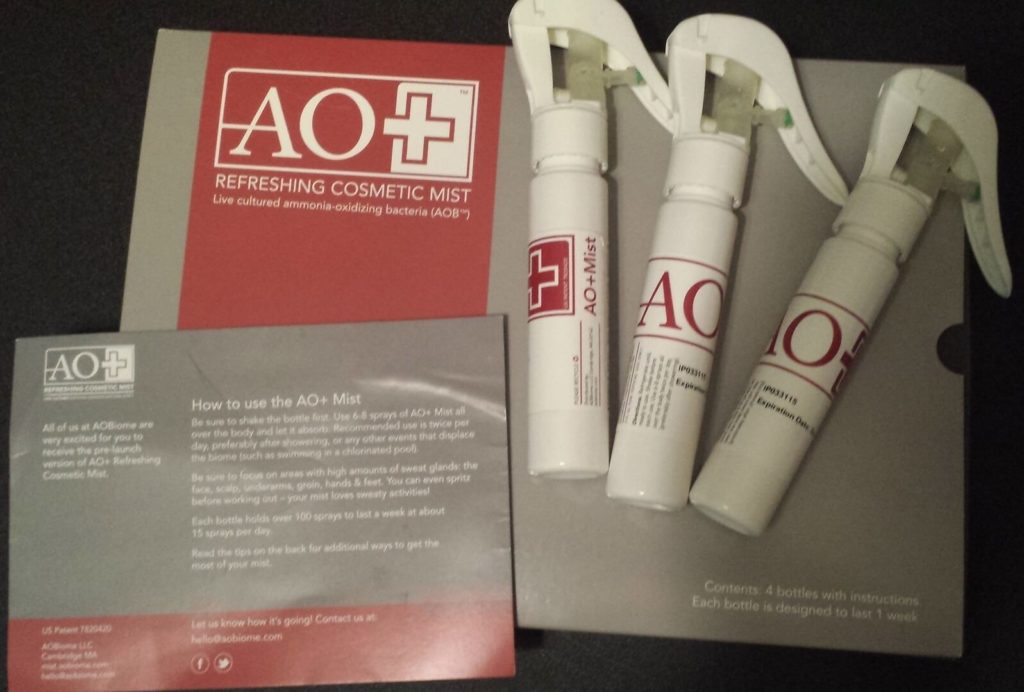 What is Ammonia Oxidizing Bacteria?

The genus, Nitrosomonas, has been studied extensively in agriculture. It is very useful because it is able to use carbon dioxide gas to build hydrocarbon structures, but instead of using photosynthesis, it gets its energy from taking electrons from nitrogen atoms. 1 It is also very effective for removing salts like trichloroethylene, benzene, and vinyl chloride from the environment that is beneficial to plants. According to Dr. Weiss, the presence of Nitrosomonas is very common on the skin of aboriginals, and other humans who live primarily in nature. Nitrosomonas is not very resilient and is easily destroyed by soap. He believes that by adding Nitrosomonas to the skin, it will help us to restore balance to our skin. 2

Nitrosomonas is fragile, to say the least, which is why I was skeptical going into this experiment. It can be destroyed by light, it is sensitive to pH, and temperature. I thought that I could spray the mist on parts of my body that were not exposed to light, but what about pH and temperature? Nitrosomonas lives optimally between a pH of 6.7 and 7, but human skin usually maintains a pH of 5.5. 3 Temperature is also very important, and Nitrosomonas needs to be within 20-30 degrees Celsius to efficiently oxidize ammonia. 4 Maintaining the right temperature is also problematic because the temperature of human skin typically 37 degrees Celsius. I asked Dr. Weiss about these issues, and he reassured me with studies of people who had living, thriving Nitrosomonas bacteria on their skin, and as long as they did not use soap, it continued to be measured by PCR tests.

For about three months, I used AO+ as directed by the packaging.  I used eight sprays in the morning, and another eight sprays at night. MotherDirt recommends that you store the bottles in the refrigerator to keep the bacteria alive longer, which makes for a cold spray! Cold thermogenesis anyone? Each container came with four bottles that were supposed to last about a week each. I found that they lasted even longer, and it took me about forty days to use a kit. The spray was cold, and wet. It did not feel oily, gritty, or irritating. I tried to spray it on broad areas of my skin so that it would dry faster. There is not much use in applying a probiotic mist if you are just going to towel it off, right?

For the product to be most effective, I had to discontinue the use of soap. It took about a week or two for my skin to adjust.  It took a lot of discipline to make it as my skin felt dirty and oily.  This was particularly unpleasant at night as oily skin does not feel very good against the bed linens. I used a natural deodorant to reduce body odor. I like to use Organic Island Deodorant, despite the ridiculous marketing and high price tag, it works well for me. During my experiment, no one complained about my smell.  After it was all over with, I told some of my friends and family what I had done, and they were unaware that I had not been using soap.

AO+ is cutting edge skin hygiene technology. Just like with phones, and computer parts, the first runs often have some kinks to work out. Since I began using this product, the price has already fallen by more than half, and they have some other products on the line as well. Dr. Weiss told me that they were doing some in-house studies to demonstrate the effectiveness of AO+ Mist.  If you want to be on the cutting edge, it doesn’t get any better than this. Jump right in, and if you do not like the product, they will give you a refund.  Otherwise, you can hang back and wait for the research to come in. Either way, it is an exciting new look at modern hygiene.