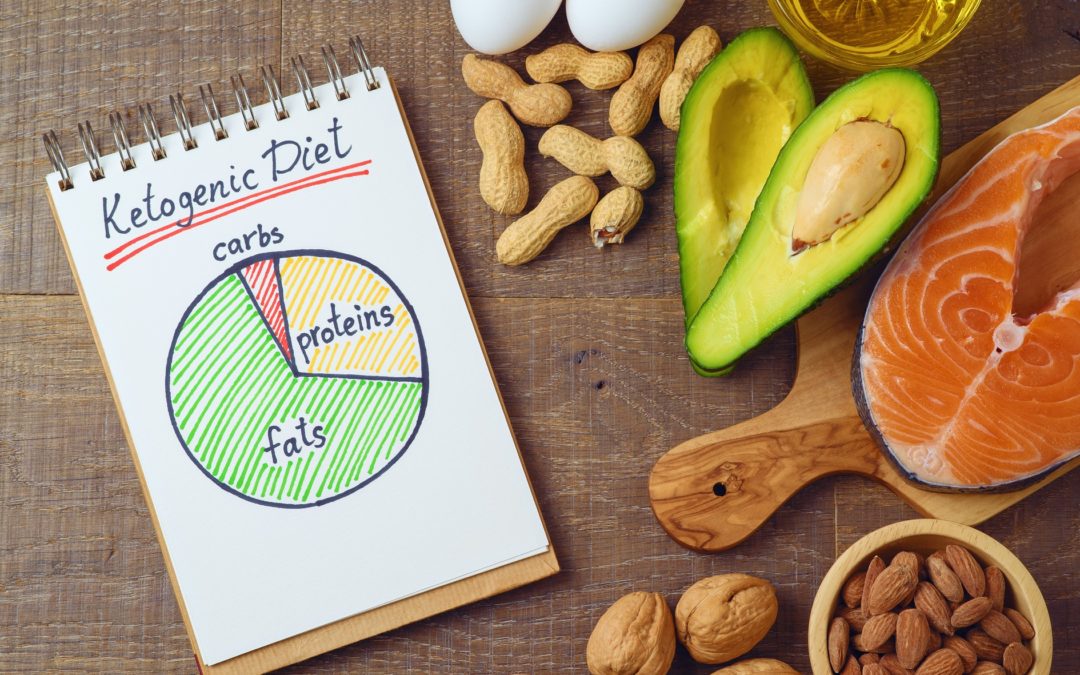 Alarmist research and media headlines pop up yearly to show that a diet rich in red meat consumption may increase your chances of developing or worsening heart disease from the endogenous production of TMAO by our microbiome. Every year we see a new headline pop up similar to “Cleveland Clinic Studies Reveal Role of Red Meat in Gut Bacteria, Heart Disease Development“. Scary, right? Let us give up eating red meat, even though it is an excellent source of animal protein and is nutrient-rich. Before I swear off ingesting red meat in my diet, is there any truth to the research and headlines that TMAO production by your microbiome from ingesting red meat causes or worsens health issues?1 2

The food we consume daily is broken down into smaller components that can be absorbed readily. These components can be metabolized or modified by our gut microbiome into beneficial or possibly harmful components. For example, bacteria can ferment carbohydrates to produce short-chain fatty acids, including butyric acid, which feeds our colonic cells, is antimicrobial, and is anti-inflammatory. Microbes in our gut can also metabolize choline, glycine, betaine, and carnitine that we ingest in our diet. The byproducts produced from the ingestion of these components by an unhealthy microbiome in the trimethylamine formation pathway may increase the risk of developing cardiovascular diseases such as atherosclerosis. Therefore, it might be best to limit the ingestion/supplementation of carnitine, betaine, glycine, or choline (half or less of standard supplement recommendations) if you test for increased trimethylamine production from stool test results including Viome.3 4

What is Atherosclerosis, and Why Should You Be Concerned?

Atherosclerosis is a vascular disease affecting large and medium arteries due to attachment of debris on the intima of the arteries that can later stiffen or form thrombus, which can trigger a cardiovascular or cerebrovascular event, sometimes life-threatening.5

6. A current or previous history of uncontrolled diabetes mellitus

15. Poor health of your oral and gut microbiome

Our body responds to vascular endothelial injury by sending white blood cells to the vascular endothelium to attempt to repair the tissue by entering through the endothelial barrier in the artery that has been disrupted. The white blood cells that are implicated the most for vascular repair are monocytes and lymphocytes. Platelets, in response to the injury, also adhere to the vessel wall and release inflammatory mediators such as cytokines and platelet-derived growth factor. The platelet-derived growth factor causes the smooth muscle cells of the artery to proliferate to replace the damaged cells. Platelet-derived growth factor causes fibroblasts to differentiate into myofibroblasts to attempt to repair the arterial wall. The monocytes differentiate into macrophages, ingest oxidized LDL that have entered the area from blood plasma because of the damaged vascular epithelium. The macrophages become large “foam cells.” The macrophages are called “foam cells” because of the change in their appearance from their numerous internal cytoplasmic vesicles and elevated lipid content. “Foam cells” from fatty streaks within the vascular system at the source of injury, and if not removed and healing does not occur at the site of injury, atherosclerosis begins.18 19 20 21

“Foam cells” die from increased oxidative stress because of the oxidized LDL, further increasing vascular inflammation. Calcification also occurs as these “foam cells” die and are left deposited in the vascular epithelium. Most vascular lesions are composed of excessive fat, dead calcified cells, collagen, and elastin. Smooth muscle cell proliferation and migration (can be prevented by the body from the release of nitric oxide causing vasodilation) from the tunica media into the intima part of vessels occurs in response to cytokines secreted by damaged endothelial cells. Smooth muscle cell proliferation and migration cause the formation of a fibrous capsule (“atheromas“) covering the fatty streak. Finally, intact vascular endothelium can prevent smooth muscle proliferation by releasing nitric oxide.22 23 24 25

Serious medical conditions and complications might develop if atherosclerosis worsens over time and can be fatal if left untreated. A heart attack (myocardial infarction), stroke, transient ischemic attack, pulmonary embolism, or aneurysm may occur from long term untreated atherosclerosis. An atherosclerosis-caused heart attack occurs when an atheroma ruptures from an affected artery and is transported into the arteries supplying the heart with blood, causing a blockage and severe inflammation. However, unstable plaques that break off and occlude arteries are not the only way atherosclerosis caused health issues to occur. Chronic atherosclerosis can severely decrease or completely obstruct blood flow in arteries from continuous plaque buildup over time and cause serious health issues.

Even the coronary arteries that supply blood to your heart can also become clogged from advanced atherosclerosis. If the clogged artery is severe enough, a localized formed blockage can block blood flow to your heart as well. If the body cannot pump any blood past that clogged artery, heart failure can occur and death if not treated promptly. Finally, if the fibrous cap separates, a soft atheroma from the bloodstream within the artery ruptures, When the atheroma ruptures, tissue and plaque particulates are released into the bloodstream. Platelets and white blood cells are activated from the rupture, and blood clotting and repair begin from the arterial injury. A thrombus forms overlying the atheroma which, if large enough, also restricts blood flow. There are many various mechanisms in which atherosclerosis causes severe health issues if left untreated.26 27 28 29

Atherosclerosis (risk and disease progression) is diagnosed by many different methods, including:30 31 32 33

How Trimethylamine-N-oxide (TMAO) is Formed Within Humans

The following are a list of ways trimethylamine-N-oxide is formed in our body:35 36 37

1. When we consume foods that contain or supplement with choline, glycine, betaine, and L-carnitine, differing amounts of trimethylamine might be produced by your microbiome.

3. Microbes in our digestive system produce the enzyme betaine reductase complex component B subunit beta, which acts on glycine and converts it into trimethylamine.

5. Microbes also produce an enzyme called beta-amylase (beta) that converts choline and L-carnitine into glycine, which can be converted into trimethylamine. 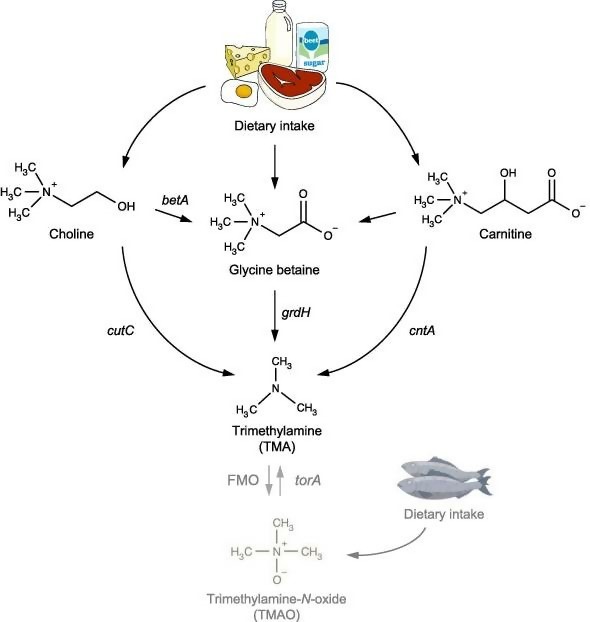 Does Increased Levels of Trimethylamine-N-oxide Within Our Bloodstream Cause/Worsen Arteriosclerosis?

Increased levels of trimethylamine-N-oxide (TMAO) in our bloodstream has been correlated with increased endothelial dysfunction and vascular inflammation related to elevated plasma TMAO levels that promote oxidative stress. Patients with type two diabetes and chronic kidney disease have a higher proportion of TMA-producing microbiota. According to studies, a positive correlation in those studies was found between TMAO and inflammation biomarkers (increased C reactive protein, for example) and endothelial dysfunction. TMAO increases the activation of the scavenger receptors CD36 and SR-A1 within macrophages, which promote lipid accumulation and foam cell formation within arteries prone to arteriosclerosis. CD36 expression and foam cell formation are induced by oxidatively modified low-density lipoproteins, enhanced by TMAO in the bloodstream. Since elevated levels of TMAO in our bloodstream enhances lipid accumulation in the bloodstream, elevates inflammation, and increases foam cell formation within the arteries, then it may cause or worsen arteriosclerosis.41

However, there is also evidence that TMAO within our bloodstream might be beneficial for the cardiovascular system as well. Since seafood contains elevated amounts of trimethylamine and trimethylamine-N-oxide, you would think that ingesting seafood would be bad for your cardiovascular system? Instead, most evidence shows that ingesting healthy seafood frequently promotes cardiovascular health. TMAO has also been shown in other studies to protect the cardiovascular system for atherosclerosis. I believe that just like elevated serum homocysteine is more of a sign of improper methylation and increased inflammation then being a cause for increased risk of heart disease, elevated TMAO is a sign of gut dysbiosis which is the real contributor to the development or worsening of arteriosclerosis.42

“On the other hand, fish and seafood are rich in TMAO and TMA, with marine fish having bigger concentrations than freshwater fish. It has been speculated that, if high TMAO levels are involved in CVD, then eating more fish would increase risk of CVD. Indeed, some studies have shown that high consumption of fish augmented circulating TMAO levels within 15 min of food consumption, suggesting that TMAO itself can be absorbed without undergoing any transformation by gut microbiota. Nevertheless, the risk of CVD is not increased as fish also contains cardioprotective molecules such us ω3-poly unsaturated fatty acids, mainly eicosapentaenoic acid (EPA) and docosahexaenoic acid (DHA). In fact, the use of fish oil (FO) in mice fed a HFD ameliorated the adverse effects produced by TMAO, including impaired glucose tolerance and adipose tissue inflammation, decreasing MCP-1 and increasing IL-10 levels.“43

“Moreover, several lines of evidence propose that TMAO might play a protective role in CVD. Supplementation with L-carnitine seems to improve some features of CVD although it raises plasma TMAO and TMA levels, and even TMAO showed positive effects against atherosclerosis in ApoE−/− transgenic mice expressing cholesteryl ester transfer protein CETP.”44

TMAO is removed from our bloodstream by our kidneys, and we urinate it out (decreased kidney function increases the half-life of TMAO and decreases its clearance rate). Any increase in serum TMAO from ingestion of choline, glycine, betaine, and L-carnitine, is quite low and is eliminated from the body quickly before it contributes to arteriosclerosis. We need more studies to determine if elevated TMAO in our bloodstream is a great risk for the development of arteriosclerosis or are elevated blood serum levels are a sign of an unhealthy gut microbiome which can read to the development of arteriosclerosis (from increased gut permeability causing systemic uncontrolled inflammation and autoimmunity). Finally, the following link is to an excellent blog discussing TMAO.45 46