SIBO: Hydrogen, Hydrogen Sulfide, or Methane, What Is the Difference? 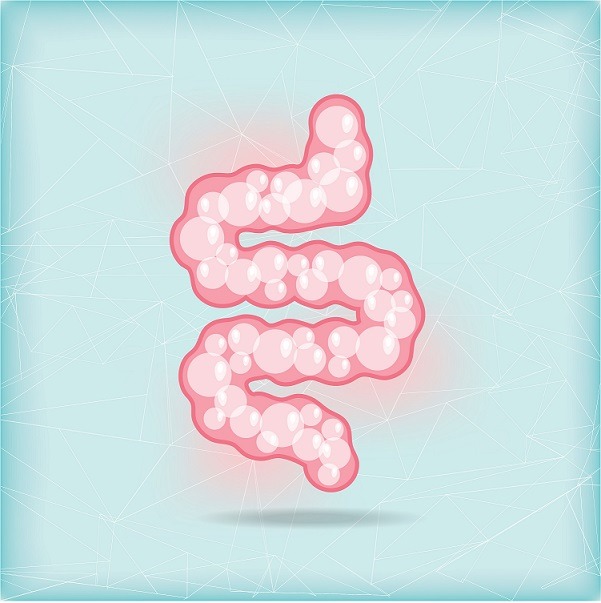 People with digestive issues suffer from different symptoms. Whether it is upper gut dysbiosis, small intestinal bacterial overgrowth (SIBO), or colonic dysbiosis, there is usually a cause, and most people have similar symptoms. What is the cause of different symptoms for people who are suffering from digestive issues? Research indicates that depending on what type of organism is dominant in your microbiome, it mostly determines your digestive issues. Five main gasses produced within our digestive tract include nitrogen, carbon dioxide, hydrogen, hydrogen sulfide, oxygen, and methane. In a healthy digestive tract, most of the gasses that comprise it are nitrogen, carbon dioxide, and hydrogen to a lesser amount. Small amounts of oxygen and possibly methane and hydrogen sulfide are found as well in a healthy gut. Many people are unaware that your stool consists of a mixture of gases and waste products, undigested fiber, and dead microorganisms. Depending on the state of your intestinal gas composition, the concentrations of gases may range from:1

Minute amounts of different gases enter the digestive tract through swallowing air, but most of that air is either belched or absorbed by the stomach into the bloodstream. Carbon dioxide is produced in our small intestine from gastric acid hydrogen ions interacting with bicarbonate in the duodenum. Carbon dioxide is also generated in the jejunum by the degradation of dietary triglycerides to fatty acids. Bacteria also produce carbon dioxide in the digestive tract through fermentation, but most of the produced carbon dioxide readily enters the bloodstream and is exhaled from the lungs. Carbon dioxide is also converted into the short-chain fatty acetate by acetic producing bacteria and methane by archaea, further reducing its net volume leading to little if any bloating from the gas, unlike large amounts of hydrogen, hydrogen sulfide, or methane. Nitrogen is most abundant within the digestive tract because it is the most abundant gas in our atmosphere. We swallow (air and ingestion of nitrates) and inhale nitrogen. Some of it is exhaled, and some of the nitrogen enters the bloodstream, where it is later diffused into the intestinal lumen and eliminated through stool and flatulence. Some nitrogen is also converted into nitrous oxide by nitrous oxide producing bacteria that are absorbed into the bloodstream to be utilized by the body. Nitrogen and carbon dioxide are the only gases in the intestinal tract that can be diffused between the lumen and the bloodstream when needed to equalize pressure within the digestive tract. The oxygen that we inhale or ingest is rapidly utilized by our cells, and very minute amounts are also diffused into the intestinal lumen. What is not used by the colonic cells is eliminated through stool and flatulence. Finally, differing quantities of hydrogen and methane can diffuse from the intestinal lumen into the bloodstream later to be exhaled. Our intestinal tract and microbiome try to maintain pressure equilibrium so that bloating rarely occurs, but what if we develop dysbiosis that profoundly differs the gas composition of our intestinal tract?2

If you are diagnosed with SIBO-D (small intestinal bacterial overgrowth with diarrhea), you are likely suffering from hydrogen-producing bacteria dysbiosis of the small intestine. Bacteria produce hydrogen gas as a byproduct of carbohydrate fermentation in our gut. Hydrogen gas exists naturally in our large intestine as a byproduct of fermentation. Some of it is absorbed into the bloodstream and is exhaled, some of it is converted into methane by archaea, and the rest of the hydrogen gas is absorbed by our stool or expelled. Significant amounts of hydrogen gas, however, are not supposed to exist in the small intestine generally due to the lack of widespread fermentation. Too much hydrogen gas causes significant bloating and abdominal distension and discomfort.3 4 5

Bacterial dysbiosis produces toxins that irritate the gastrointestinal lining, causing diarrhea. Most of these toxins overload the TRPV1 receptors in our gut, significantly increasing osmolarity, drawing more water into the bowel, and increasing gut peristalsis, causing diarrhea. Diarrhea is a defense mechanism by the body to protect itself from bacterial toxins and dysbiosis by eliminating both. Some hydrogen dominant producing bacteria also produce serotonin, which in large amounts can further increase motility. Capsaicin found in peppers also activates the TRPV1 receptors, causing diarrhea in many people after consumption.6 7

Hydrogen-dominant bacterial dysbiosis would cause diarrhea, especially in SIBO. If you are suffering from SIBO and are dealing with diarrhea, read my main SIBO blog entry or my book Fix Your Gut for more information on how to deal with this issue.

Sulfur is an essential mineral for our health. All living cells use sulfur, and it is the seventh most abundant element in the human body. Our skin, hair, nails, muscles, and bones all contain sulfur. Our intestinal mucosal barrier is composed of sulfomucins, and it is essential for the endogenous production of glutathione and insulin. Most of our ingested sulfur the body uses comes from our digestive system and microbiome breaking down protein into amino acids. Cysteine, taurine, homocysteine, and methionine are examples of sulfonated amino acids that we obtain from protein ingestion. We also ingest sulfur-containing foods, including cruciferous vegetables and alliums that supply us with the mineral sulfur.12

Most of the sulfur in the human body is used up by our cells and microbiome. Some sulfur metabolism byproducts are detoxified and excreted from our body as well. Minute amounts of sulfur are endogenously converted into hydrogen sulfide. Hydrogen sulfide is necessary because it is an endogenous cellular signaling molecule, it is important for producing mitochondrial energy, it is a vasodilator, and in very minute amounts can reduce mucosal injury and inflammation. In someone with a healthy microbiome, very minute amounts of hydrogen sulfide are produced from ingested sulfur-containing food. Hydrogen sulfide dysbiosis mainly occurs in the upper gut (oral cavity, stomach, duodenum, liver, gallbladder, and pancreas) but can cause small intestinal and colonic dysbiosis as well. Many bacteria that produce hydrogen sulfide from sulfur colonize the upper gut and colonize other parts of your digestive tract and body.13 14 15

So what are symptoms of hydrogen sulfide dysbiosis?16 17 18

If our microbiome produces too much hydrogen sulfide and our body’s natural ways of detoxifying it in the gut are overwhelmed, it can cause many health issues. In addition, if you have CBS genetic polymorphisms, you may have problems detoxifying sulfur and hydrogen sulfide properly, causing problems.

Your intestinal flora is composed of organisms known as archaea. Archaea are different from bacteria; they are single-celled organisms that lack a nucleus. Archaea, in our digestive system, feeds off hydrogen that bacteria produce during the fermentation of carbohydrates in our gut and carbon dioxide we inhale and produce as a byproduct of digestion. Archaea then produce the odorless gas methane as a byproduct of their metabolism.24 25 26

The more fermentation and hydrogen gas that occurs in the intestines, the more methane archaea will produce. Cows flatulate a lot more methane than people because they consume a lot more fermentable foodstuff (grass, for example) than we consume and have more archaea by volume. Methanobrevibacter smithii seems to be the most dominant of the archaea species in our gut, compromising at least ninety percent of our archaea gut flora.27 28

What happens to the hydrogen within our body: 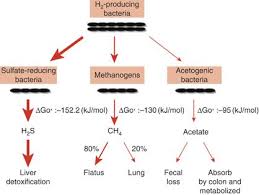 Decreased migrating motor complex (MMC) function and lactose malabsorption have been correlated with archaeal dysbiosis. Decreased MMC function leads to gastroparesis and constipation. Decreased MMC function also leads to an increase of hydrogen (feeds archaea) and methane concentrations in the gut, which causes excessive bloating. Unlike bacteria, it is unknown if archaea produce TRPV1 activating toxins, which might explain why they do not cause diarrhea. Colon pH is also significantly lower in people suffering from archaea dysbiosis, which can help protect dysbiosis from other organisms that require higher pH to survive and might compete in a healthy environment and the intestinal immune cells.29 30 31

How does archaea dysbiosis further hinder MMC function to the point of chronic constipation?

Serotonin (5-HT3/5-HT4) is one of the neurotransmitters associated with increasing gut peristalsis. Lower amounts of serotonin in the gut equates to lower MMC function that would explain the cause of chronic constipation in methane dominant SIBO. Lowered activation of 5-HT3 receptors in the ileum greatly slows down the emptying of the small intestine, leading to SIBO.33 34

It is more difficult to resolve archaea dysbiosis because they tend to be more antimicrobial-resistant and form thick biofilms.35 Treatment of the dysbiosis might require multiple natural antimicrobial agents, antibiotics, and anti-biofilm agents. Changing your diet to a low FODMAP diet might relieve archaea dysbiosis by limiting the amount of hydrogen they have to metabolize by the lack of carbohydrates hydrogen bacteria have to ferment. Archaea are very hardy and can survive a long time without hydrogen, so it might be possible that switching to a low FODMAP diet would also do very little to archaea dysbiosis symptoms.

Increasing MMC function during archaea dysbiosis might be one of the most important things one can do to find relief.

If our gut is working correctly different gases are maintained in healthy ratios from fermentation, inhalation, or by digestive processes. If your digestion is healthy nitrogen is found the most, followed by carbon dioxide, hydrogen, oxygen, methane, and hydrogen sulfide. The predominant gases found or produced in the small intestine is nitrogen and carbon dioxide. If increased hydrogen, methane, or hydrogen sulfide gas is produced, you might be suffering from upper gut dysbiosis or SIBO. Follow my commendations above to improve your motility and follow my protocols to relieve dysbiosis to find relief.