Why Supplementing With Probiotics May Make You Ill – Part 3: Mislabeling

Probiotics are supposed to improve digestive health, yet they sometimes make people ill – could probiotics cause them to develop overgrowth? Why do supplements hailed for improving digestive health make some people worse?

Is it the shift in the microbiome that makes people ill? Or is it something more sinister?

When culturing probiotic supplements, issues can arise. Contamination, horizontal gene transfer (one bacteria transfers genes to another, antibiotic resistance is an example of this,) and mislabeling of strains to name a few. This blog article is going to tackle the issue of the mislabeling of strains and how that can be harmful to your health.

Mislabeling of different strains in probiotic supplements has occurred since they were brought to market. Sometimes mislabeling is not directly the manufacturers fault since nomenclature of strains changes occasionally. Bacillus coagulans was originally misidentified as Lactobacillus sporogenes when it was discovered in the early 1930’s. There is still a debate about the correct genus of the bacteria between probiotic supplement manufacturers and microbiologists. One study about the debate states: 1

“In any case, the use of the term Lactobacillus sporogenes seems to aim to deliberately confound consumers, trying to benefit from association with the extensive literature on the safety and health benefits of the genus Lactobacillus.” 2

And to stir up the people who believe I am too harsh on HSO’s, from the same study:

“For this reason the use of the wrong nomenclature of L. sporogenes becomes once more questionable, since it seems to try to get advantage from the old tradition of safety of lactobacilli to remedy to the lack of safety reports on B. coagulans.” 3

The conclusion of the report is that probiotic companies that mislabel B. coagulans as L. sporogenes are doing it for their advantage since the reclassification of the bacteria occurred a long time ago, and anyone who is selling a probiotic product should know about correct nomenclature for safety. 4

Colony forming unit amounts in probiotics have also been mislabeled. Most of the stated colony forming units on probiotic supplement levels are for below what can be cultured or considered to be “live” probiotics. There was a recent study done to determine whether or not the amount of probiotics that were alive coincided with the amount listed on the label. In the study, only one probiotic out of the five was able to culture the amount that was claimed to be alive in the supplements, and that probiotic was able to culture a lot more than was stated in the supplement. 5 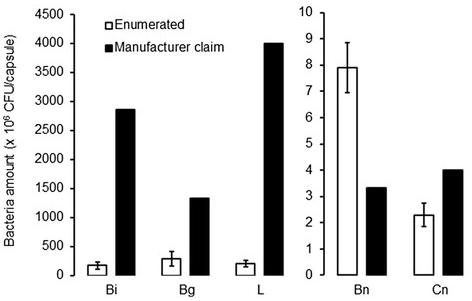 So if most of these probiotics are dead when we are ingesting them, why do some people still see a benefit when taking them? It would appear that even dead probiotics show possible benefits for some people because our immune system reacts to them, up-regulates itself, and begins to fight overgrowth. 6 That being said, would it not be better to take immune stimulants or a good prebiotic like GOS to stimulate the growth of our probiotic flora to tackle the overgrowth instead?