Roemheld Syndrome, Stomach Issues Can Cause Heart Disease and Arrhythmia

Roemheld Syndrome, What is it and How to Find Relief

Roemheld syndrome (gastric-cardia syndrome) is personal to me. I know the condition exists even with the little information out there provided to us about it. I suffered from it, and it caused me to have poor heart health for a time and arrhythmia.

I believe that the syndrome exists because I suffered from the syndrome after my son Abel died, and it was horrific.

My son Abel had passed away a month before I felt the dreaded symptoms of gastric cardia syndrome. My silent reflux had come back in spades from all the stress. When I overate, my heart rate would suddenly dip, then shoot up to 150+ beats per minute. My blood pressure would also go sky-high. Why is this happening to me? I started to notice some patterns over time. When I drank water and burped, I felt better. When I took magnesium or had a bowel movement, I felt better. When I slowed my breathing and ate less, I also felt better. I did not know about gastric-cardia syndrome then, but I went on a restrictive low-FODMAP, Dropping Acid Diet I also felt better. Both of the diets reduced microbial fermentation, bloating, and inflammation which relieved my symptoms. In a few months, I lost weight and got my digestion under control, and the symptoms went into remission.

Roemheld syndrome is well known in Germany, but not much of the medical condition is known outside of Europe. I hope I can spread awareness about this cruel, debilitating medical condition.

What Is Roemheld Syndrome and How Serious Is It for Your Heart Health?

Roemheld syndrome is also known as gastric-cardia syndrome and was discovered by the German medical internist Ludwig Roemheld in the 1930s. Simply put it is a condition where inadequate digestive health and/or microbial dysbiosis leads to cardiac symptoms and issues. Ever felt a very low or very high heart rate during or after eating that was relieved by burping? Ever felt your heart skip for multiple beats or have chest pain after eating a large meal? You probably suffer from gastric-cardia syndrome.

Most of the following symptoms of the syndrome seem to occur after eating, mainly if you consumed a large meal. Some people have also reported their symptoms after strenuous activity, when excessive pressure is applied to their abdomen, or when awoken with dyspepsia during the night.

Here are the proposed symptoms or consequences of Roemheld syndrome:

If you are showing symptoms of Roemheld syndrome, your healthcare professional will run tests to determine your cardiovascular health. A cardiologist might run the following tests to assess your heart health: an electrocardiogram, twenty-four-hour Holter monitor, cardiac scan (magnetic resonance imaging [MRI] or computed tomography scan [CT]), echocardiogram, and/or blood work. If your heart appears healthy, you might be referred to a gastroenterologist if you are also suffering from gastrointestinal issues. A gastroenterologist might also run a few tests to determine your gastrointestinal symptoms, including abdominal ultrasound, abdominal scans (CT, X-ray, MRI), and an endoscopy procedure. Most of the time, the only gastrointestinal issues found by the gastroenterologist in people suffering from Roemheld syndrome are reflux or a hiatal hernia.

Roemheld syndrome has a few mechanical triggers. A primary mechanical trigger of the syndrome occurs when excessive pressure is placed on the stomach’s fundus, moving upward and displacing its anatomical position. With increased epigastric pressure, the diaphragm’s position elevates and puts pressure on your heart, lungs, and vagus nerve. Hiatal hernias are a significant mechanical trigger of the syndrome and shift part of the stomach upward, putting pressure on your diaphragm, causing breathing troubles. Gas produced from upper gut dybiosis within the stomach can anatomically push the stomach upward from excessive bloating and distension. Finally, adhesions, anatomical surgical modifications, and meshes from gastrointestinal surgeries (including gastric bypass, hernia repair, and anti-reflux surgeries) may also displace your organs within the epigastric region, triggering gastric cardia syndrome.

“Hiatus hernia is associated with increased occurrence of GERD symptoms. Whether the presence of hiatus hernia further increase the risk of AF is unknown. A hiatus hernia as well as an intrathoracic stomach, representing the end stage of a hiatal hernial diaphragm, has the potential to mechanically irritate the left atrium. Additionally, the hernia may increase reflux and, thereby, result in oesophagitis accompanied by AF. The association between hiatus hernia and atrial tachyarrhythmias has been described as increases in atrial ectopic beats upon swallowing in a patient with a big hiatus hernia. Interestingly, there are case reports that repair of a large paraoesophageal hernia or an intrathoracic stomach can suppress paroxysmal atrial arrhythmias.“1

Another mechanical trigger of Roemheld syndrome is increased pressure on your vagus nerve. Your vagus nerve is your tenth cranial nerve that partly controls your autonomic nervous system. Your vagus nerve controls the parasympathetic nervous system response of your heart, lungs, and digestive tract. For example, gastrointestinal reflux can cause esophageal, throat, and laryngeal inflammation, which can cause increased pressure on your vagus nerve, interrupting its ability to properly transfer nerve impulses from your brain and other organs, including your heart and lungs. Heart rate and blood pressure may fluctuate widely when excessive force is placed upon your vagus nerve. Troubled and/or forced conscious breathing occurs when excessive force is placed upon your vagus nerve. When your heart rate and blood pressure drop, the body’s autonomic nervous system is activated by a catecholamine dump into your bloodstream, increasing your blood pressure and heart rate. The increased circulating catecholamines cause a massive increase in your blood pressure and heart rate and can cause panic attacks. Unless an underlying arrhythmia is triggered, the fluctuation from low to high cardiac pulses and pressure may be undetectable unless you are actively monitored during an attack; it can be easily mistaken as anxiety. Strong coronary reflexes happen when an attack occurs, causing many of the cardiac symptoms associated with the syndrome.

“Neural reflex arcs from the oesophagus and the heart have been shown in both animals and humans. In humans, chemical, electrical, and mechanical stimulation of the oesophagus modifies the sympathovagal balance. Oesophageal stimulation amplifies respiratory-driven cardiac vagoafferent modulation, while decreasing sympathetic modulation. Oesophageal acid stimulation is further associated with an increase in vagal activity.Acid refluxes cause a local inflammatory process that may directly alter the autonomic innervations of the oesophageal mucosa and may also penetrate the oesophageal wall and stimulate the adjacent vagal nerves. Injury of the distal oesophagus can further impair vagal nerve responses, particularly nerve sensitization of the afferent pathways. These and other considerations suggest the involvement of the cardio-oesophageal reflex in case of GERD associated AF.

Several observations support the relevant role of the autonomic nervous system for the initiation and the maintenance of AF. Studies in lone AF patients and in animal models of intermittent rapid atrial pacing and congestive heart failure have indicated that AF onset is associated with simultaneous sympathovagal activation rather than with an increase in vagal or sympathetic drive alone. On the cellular level, cholinergic muscarinergic receptors are the primary mediators of parasympathetic control of heart function. Muscarin-2 receptor (M2R) stimulation with acetylcholine directly activates G-protein-dependent potassium currents leading to a shortening of the atrial action potential duration and atrial effective refractory period.34 Additionally, the effect of vagal stimulation on atrial refractoriness is heterogeneous because of heterogeneity in the distribution of parasympathetic nerve endings and/or M2Rs. Increased vagal activation, as present in GERD-patients, creates an arrhythmogenic substrate for re-entry and, thereby, increases AF-susceptibility.“2

“There is a 3–8% higher risk of new AF-onset with each unit increase in body mass index, and this association is independent of other cardiovascular risk factors. Pericardial fat is associated with the occurrence of AF, persistence of AF, left-atrial enlargement, and worse outcomes of AF ablation.44 Additionally, obesity results in progressive atrial structural and electrical remodelling. In sheep, following a high-calorie diet, obesity was associated with atrial electro-structural remodelling, increased atrial size, changes in conduction, and more persistent AF episodes. Obesity was associated with reduced posterior left-atrial endocardial voltage and infiltration of contiguous posterior left-atrial muscle by epicardial fat. Whether the anatomical proximity of the posterior wall of the left atrium and the oesophagus play a role for the development of this potential substrate for AF is unknown. In obese patients, risk factor management according to American Heart Association/American College of Cardiology guidelines improved the long-term success of AF ablation.“3 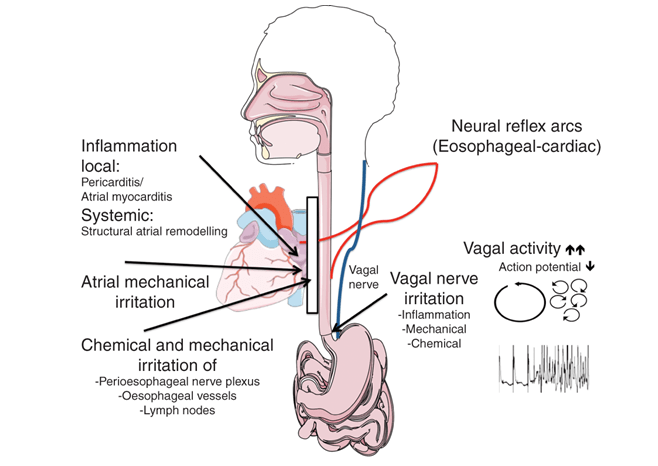 Roemheld syndrome RARELY may cause heart disease and eventually heart failure. Over time the syndrome may lead to a weakening of the cardiovascular system that might lead to cardiomyopathy and congestive heart failure from consistent arrhythmia and/or frequent sudden blood pressure changes.

Causes of Roemheld Syndrome Include:

What Can Be Done to Help Recover From Roemheld Syndrome

Here are some tips to help reduce your syndrome issues and improve your health:

Information is limited on gastric-cardia syndrome so please if you find any relevant studies or books pertaining to the condition, leave a comment below. Thank you.